Future Relationship Negotiations: The EU sets out its Stall

The United Kingdom left the European Union on 31 Jan 2020 pursuant to the Agreement on the withdrawal of theUnited Kingdom of Great Britain and Nothern Ireland from the EuropeanUnion and the European AtomicEnergy Community ("the Withdrawal Agreement"). The Withdrawal Agreement provides for an implementation period during which EU law will continue to apply to the UK until 31 Dec 2020. One of the reasons for the implementation period is to enable the parties to negotiate a new relationship to take effect from 1 Jan 2021.

The parties have already agreed a framework for such a relationship in the Political Declaration setting out the framework for the future relationship between the European Union and the theUnited Kingdom ("the Political Declaration").  The European Council has now authorized the opening of negotiations with the UK for a new partnership agreement in the terms of the draft decision of 13 Feb 2020 and an addendum to the decision setting out directives for those negotiations.

The decision consists of 8 recitals and 3 articles.  The recitals refer to the Withdrawal Agreement and the Political Declaration as well as Council guidelines of 30 March 2018 restating the Council's determination to have as close as possible a partnership with the UK covering trade and economic cooperation and also other areas including, in particular the fight against terrorism and international crime, as well as security, defence and foreign policy. Art 1 of the decision authorizes the European Commission to open negotiations for a new partnership agreement.  Art 2 nominates the Commission as the EU's negotiator.  Art 3 requires the negotiations to be conducted in consultation with the Working Party on the United Kingdom and in accordance with the directives contained in the addendum, subject to any directives which the Council may subsequently issue to the Commission.

The addendum is a much larger document consisting of 46 pages containing 172 paragraphs divided into an introduction and four Parts.  Paragraph 5 of the introduction reminds readers that:

Paragraph 9 acknowledges the very short duration of the implementation period. The Commission is urged to achieve as much as possible during that time and to be ready to continue negotiations after its expiry.

Part I of the addendum concerns "Initial Provisions".  Paragraph 12 recites the parties' core values and rights including a shared commitment to combat climate change which may or may not be reflected in this country's negotiations for a trade agreement with the USA.  Another shared commitment is maintaining a high level of data protection. The proposed partnership envisages future UK participation in some EU and Euratom programmes in cultural, scientific and other matters.

Part II concerns economics.  It should conform to the Agreement to establish the World Trade Organization and its policies for trade.  There should be free trade in goods, customs cooperation, trade facilitation and a measure of regulatory alignment.  Trade in services and the free flow of investment should be prioritized.  Intellectual property is mentioned specifically.  There are sections on financial services, competition, mobility of labour, transport cooperation and fisheries the last of which is likely to be particularly sensitive politically.

Part IV deals with institutional matters. Paragraph 155 proposes "a governing body responsible for managing and supervising the implementation and operation of the envisaged partnership, facilitating the resolution of disputes" Disputes that cannot be resolved through consultation should be referred to arbitration with provision for the referral of points of EU law to be referred to the Court of Justice of the European Union. That provision has been criticized by some but it is hard to see an objection. It merely provides machinery to access the Court where none exists right now.   The tribunal will have its seat in a national jurisdiction with direct access to national courts on issues of national law.

Anyone wishing to discuss this article or the new relationship negotiations generally should call me on +44 (0)20 7404 5252 during normal office hours or send me a message through my contact page.
at Wednesday, February 26, 2020 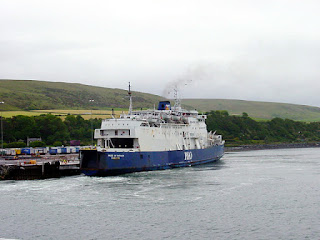